While the meat alternative set is dominated by burgers and sausages, seafood company Van Cleve sees an opportunity to be a big fish in the small pond of plant-based seafood. Last month the company launched The Plant Based Seafood Co., a spinoff from its (also newly launched) clean label seafood brand Wild Skinny Clean. The company sees both brands as a response to the seafood industry’s many issues, including mislabeled products and the use of chemicals and preservatives.

The Plant Based Seafood Co., which eventually hopes to roll out a portfolio of brands, last month launched Mind Blown plant-based frozen seafood entrees including plain Shrimp, Dusted Shrimp, Crunchy Coconut Shrimp, Crab-Like Cakes and Dusted Bay Scallops. The line is made with konjac powder, vegetable gum, vegetable root starch, and seasonings and has a comparable protein content to seafood, but with less fat and sodium. Currently, each 25-count pack sells for $25 to $28 on the brands website.

A 20-year-old family-owned company based in Spotsylvania, Virginia, Van Cleve Seafood initially launched as a restaurant before launching a line of comfort food-focused seafood dishes like Crab Pie and Blue Crab Ravioli in 2013. The company is run by Shelly Van Cleve along with her daughters, Monica Talbert and Allie Cushing, and the original line is still sold in select small retailers, restaurants and online.

Despite growing up in the seafood business, Talbert found herself troubled by the industry’s practices; not only was there lack of clean-label, transparent products, but human trafficking and child labor are also major issues, she said. Additionally, according to Van Cleve, 80% of the country’s seafood is imported, 50% farm-raised, and 20-35% of seafood products are mislabeled.

“The industry has its own problems. We have seen behind the curtain and some of the things are not pretty,” Van Cleve said.

Hoping to address these problems, Van Cleve Seafood launched Wild Skinny Clean, a line of limited ingredient seafood entrees, in January. However, what captured the most fanfare was its plant-based Crab-Like Cake, with many consumers noting their “minds were blown” at how much the product tasted like crab, Van Cleve said. The feedback made it clear that a fully plant-based seafood brand would be the “natural stepping stone” to offer the “mindful change” that millennials are looking for, Van Cleve said. While Wild Skinny Clean remains as a sub brand of Van Cleve Seafood, The Plant Based Seafood Co. is a separate entity with Talbert at the helm as CEO.

Previously sold under Wild Skinny Clean, the plant-based line has received wide interest, but for private-label partnerships, Van Cleve said, along with restaurants and amusement parks. The brand has rejected the private-label route to instead build out the Mind Blown brand, starting in the natural and specialty channel and in foodservice.

For now, the company hopes to see Mind Blown sold in the seafood section of stores, alongside crab cakes and fish sticks, but is also exploring if placement alongside other meat alternatives resonates better with shoppers.

Mind Blown is using the funds to hone the taste and texture of its products. According to Talbert, achieving the right balance is even more difficult than formulating a plant-based burger, and she said these associated costs have hindered the takeoff of plant-based seafood. As a new segment of products, plant-based seafood startups have to invest in supply chain and production capabilities from the ground up.

The company will open a dedicated vegan plant on Gwynn’s Island in Virginia’s Chesapeake Bay in November with the hopes of scaling up and developing a safe supply chain. The facility will eventually include a tasting room, retail store, fulfillment center and innovation kitchen. Next year, Mind Blown plans to launch shelf-stable plant-based shrimp and scallops, which Van Cleve noted will help drive in-store trial (with no freezer door as a barrier) as well as reduce shipping costs for online sales. 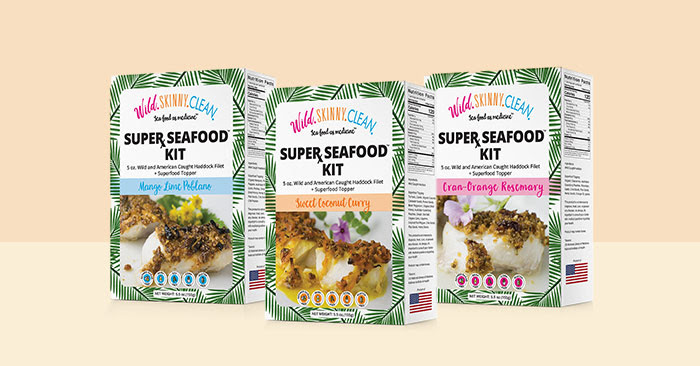 Wild Skinny Clean, meanwhile, is sold in 12 Greenwise Market locations as well as online, with further retail rollouts delayed due to the pandemic, Talbert said. The product line includes three flavors of Superfood Topped Haddock kits, along with the Superfood toppings themselves.

Though focused on different base ingredients, Talbert said, Wild Skinny Clean and Mind Blown both offer millennial shoppers different ways to shop the seafood set without compromising their values.

“We are not out to convince people to eat either/or, we are out to make great food for people to enjoy,” she said. “We think about market demand and also impact. Offering a replacement to farmed shrimp can have a huge positive environmental impact on our oceans.”

Stay up to date on new product launches, pop up tastings and promotions!

By clicking enter you are verifying that you are old enough to consume alcohol.

Your cart is currently empty.